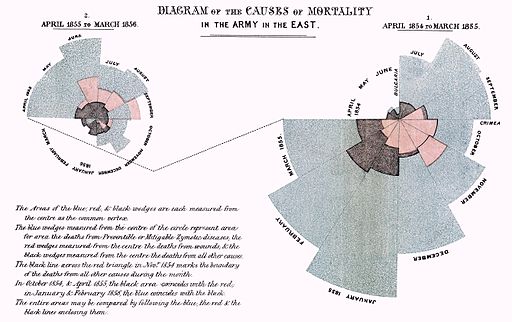 This graphic indicates the number of deaths that occurred from preventable diseases (in blue), those that were the results of wounds (in red), and those due to other causes (in black).

"Diagram of the causes of mortality in the army in the East" was published in Notes on Matters Affecting the Health, Efficiency, and Hospital Administration of the British Army and sent to Queen Victoria in 1858.

The Areas of the blue, red, & black wedges are each measured from the centre as the common vertex.

The black line across the red triangle in Nov. 1854 marks the boundary of the deaths from all other causes during the month.

The entire areas may be compared by following the blue, the red, & the black lines enclosing them.