Using credible and relevant sources is important. Learn what questions to ask and some strategies to apply for determining if your source is or isn't appropriate for your project.

The information we find online may or may not be reliable. When working with websites, social media, and other online resources, use SIFT to evaluate them:

STOP.
When you find a page or a post, stop and ask yourself if you know the source of the information or anything about the reputation of the claim, especially if you have a strong reaction to the content. Take a moment to reset, remembering the purpose of your research and what you plan to do with the information you find.

Example
You may have a strong response to the tweet below. Before you take it at face value or share it, stop
to assess your reaction and consider whether you know anything about the source or the claim. 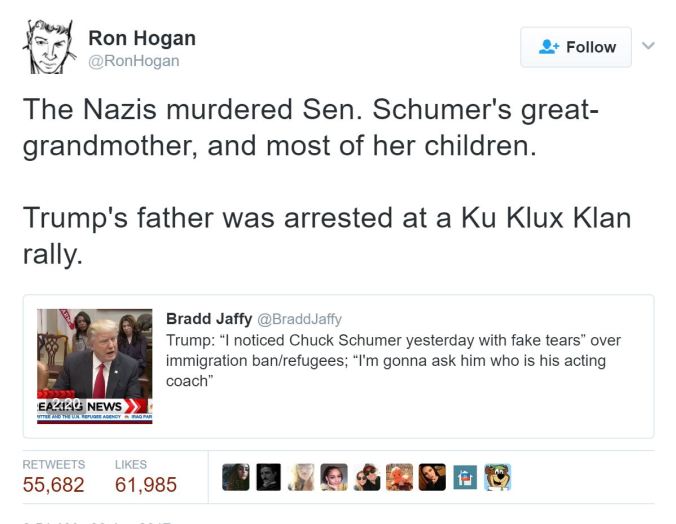 INVESTIGATE the source.
Take sixty seconds to figure out where the media is from before reading it. If you're reading a piece on economics by a Nobel prize-winning economist, you should know that before you read it. Conversely, if you’re watching a video on the many benefits of milk consumption that was put out by the dairy industry, you'll want to know that as well.

Example
Consider the above tweet. Who is Ron Hogan? What do we know about him? Is he reliable? We know Twitter does not
fact check. A google search tells us that Hogan is an author and editor, but we can't trust that this tweet is true.

FIND trusted coverage.
Sometimes it's less important to know about the source and more importance to assess their claim. Look for credible sources that comment on the claim and compare information to determine whether there appears to be a consensus.

Example
Continuing with our example, we have to find trusted coverage for two claims: First, that Senator Schumer's great-grandmother and most of her children were murdered by Nazis, and second, that President Trump's father was arrested at a KKK rally. Searching the first claim returns a Vox article, which substantiates the claim: "[Schumer's] great-grandmother died in the Holocaust, as did seven of her nine children." Additionally, Politifact confirms that Fred Trump was arrested at a KKK rally. That said, Politifact notes that it is unclear if Trump was participating as a KKK member or simply a bystander, and we should not infer that he was involved with the KKK, as the tweet would have us believe.

Example
Many websites today do a lot of "reporting on reporting." The below screenshot is from the New York Post, but as you can see in the text, there is no original reporting; instead, all quotes are taken from a talk show called "Loose Women". To back up these claims, you'd want to review the original source, assess the credibility of the virologist, and look for trusted coverage that substantiates the claims. 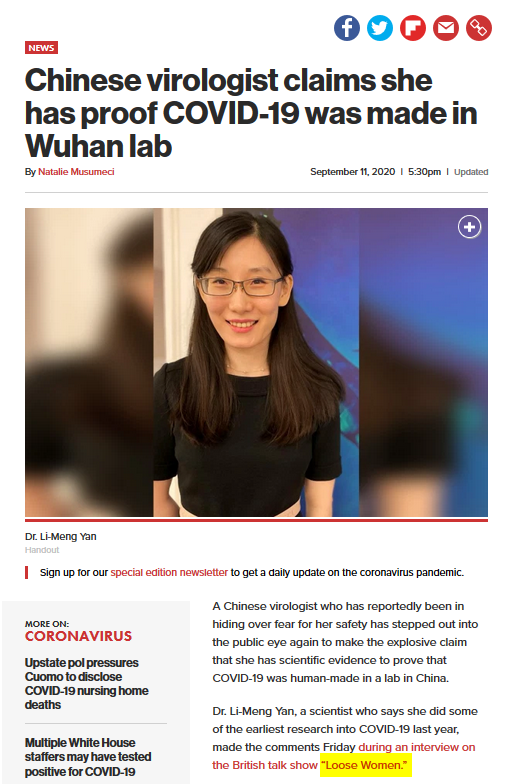 Modified from Mike Caulfield's SIFT (Four Moves) and Web Literacy for Student Fact-Checkers, which are licensed under a Creative Commons Attribution 4.0 International License.

When fact checking claims-- especially in the news or social media-- the following websites may come of use: