Art of Persuasion: World War II Posters from the US Government, 1941-45 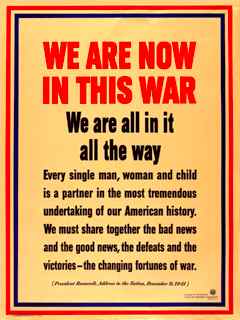 Just days after the attack on Pearl Harbor, President Franklin Delano Roosevelt announced, “every single man, woman and child is a partner in the most tremendous undertaking in American history.”

This online collection, “Art of Persuasion: World War II Posters from the United States Government, 1941–45,” showcases a representative sampling of original WWII posters artfully persuading—some more than others—the American people to perform their patriotic duty and make sacrifices for the war. The posters, many iconic images and easily recognizable seventy years later, are part of our visual culture and collective memory. They represent a broad range of messages and artistic styles. Many were created by important artists of the period who voluntarily offered their talents for the war effort.

The historic posters are part of Milner Library’s Government Documents Collection. Themes include Productivity, " Jenny on the Job," "Victory begins at Home," War Bonds, Conservation, Careless Talk, and Travel on the Home Front.

The posters were part of a coordinated and concerted attempt by the government’s Office of War Information (OWI) to persuade those on the home front to do, or keeping doing, the right thing whether it meant buying war bonds, conserving resources, working efficiently on the job or in the home, or simply staying silent. Some were largely informational. For example, posters on “Victory Gardens” offered step-by-step instructions on the process of canning tomatoes. Other posters portrayed threateningly graphic images of what could happen to loved ones on the front lines if citizens didn’t do their part. By today’s standards some posters display images and language vilifying the enemy with shockingly offensive caricatures and words, while others represent stereotypical and demeaning representations. The posters reflect prevailing attitudes of the era and a reaction from the government to seek the American public’s assistance in winning a war. Please note the exhibit displays items for their historical perspective and significance. Milner Library in no way condones the use of language or images that is offensive to persons of any race, religion, disability status, ethnicity/national origin, gender or sexual orientation.

These posters serve as a primary source documenting the United States during a time of war and are especially significant as we approach the 70th Anniversary of the attack on Pearl Harbor and the 10th Anniversary of 9/11. For more information on this collection please contact Angela Bonnell, the Government Documents Librarian at Milner Library.